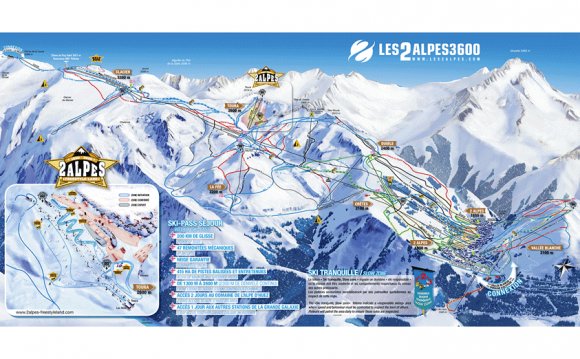 Who is Les Deux Alpes good for?

The French Ski Resort of Les Deux Alpes is part of the Grande Galaxie ski area with access to 530km of downhill skiing, with 264 individual pistes, served by 151 ski lifts. In addition to the skiing in Les Deux Alpes itself (220km of pisted ski runs), the appropriate ski Lift Pass will allow you to ski or snowboard in the other Grande Galaxie ski resorts of La Grave, Puy Saint Vincent and Serre Chevalier.

The ski resort itself is above 1500m, so skiing or boarding back to the resort is usually possible. With pistes above 2500 metres, skiing and snowboarding is assured throughout the season.

There are four Airports within two hours drive, so ski weekends, snowboard breaks and short ski holidays to Les Deux Alpes are perfectly feasible. Grenoble Airport is just one hours drive away, in good driving conditions, so you can be on the piste quickly.

The vast vertical of Les 2 Alpes ski area extends from the wooded slopes by the resort itself up to the year-round snow fields of the glacier. With the upper lifts reached by walk-on lifts and the resort itself at quite a healthy altitude despite being one of the more southerly of the major French resorts, snowcover is not a problem. More than 78 snow cannons cover the lower slopes to make double sure.

It's an unusual ski area in that the ski area does not fan out around the resort as so many do but instead keeps going backwards, up to the glacier and away from Les 2 Alpes itself - rather like Keystone in Colorado. Beginners have a good selection of runs with more than 20 greens (very easy) trails around the resort, mostly served by more than a dozen parallel drags that run next to one another up from this high valley floor. They have either the Ecole de Ski Français (ESF) with about 150 instructors (rising to 200 in February peak season)and the ability to offers tuition in Portugese or Russian as well as the more mainstream languages if required, or there's the International Ski School.

Intermediates have the most to excite them - with this huge terrain rising up to the snow sure Glacier du Mont Lans which has the remarkable subterranean funicular actually running underneath the glacier you ski back down over. For a bit of added fun the slalom stadium features a free parallel slalom course. Although Les 2 Alpes alone does not have a particularly highly thought of ski area for experts, its off piste lift link to La Grave is a major asset. The 2100 metre descent from the top lift above the Girose Glacier down to the tiny village is regarded as one of the most challenging, and dangerous, lift served descent on earth. It has claimed the lives of several expert skiers. The route is normally open from late January through to April.

La Grave is one of a handful of small European ski centres off the tour operators maps and lacking in any facilities but none-the-less legendary for their incredibly expert and off-piste skiing. A couple of cable cars make the return trip back up from La Grave and only experts, ideally with guides should take this and other off piste routes down.

There are eight black pistes of which the most popular are Super Diable and the Belle Etoile returning to the village. The area ski pass includes a day's skiing on the Milky Way or in Alpe d'Huez or Serre Chevalier if Les 2 Alpe's skiing fails to satisfy for long enough.

Les 2 Alpes 'World Snowboard Exhibition' staged at the top of the glacier in late October each season is one of the longest established annual events in the still short history of 'boarding. It is also believed to be the 'highest' snowboarding event staged and is open to the general public as well as pros. Throughout the season the snowboarding park is one of the best, with boarder cross, half pipe and various competitions staged. Events include barbecue and test days and the park has piped music.

There are three Snowboard Schools operational in Les 2 Alpes. In the summer boarding continues on the glaciers with camps, competitions, events and tuition on offer, along with free riding up on the largest glacier summer sliding area in Europe. A Fun Park is also created up top.

One of the livliest of the French resorts there are more than 30 bars to choose from and later on four night clubs which remain open until dawn in peak season. There are ten piano bars - one of which offers a selection of 200 different beers. Several have a 'British' theme, including Mike's Bar, Smokey Joe's and the Windsor with its selection of whiskys.

The Café Bresilien has a reputation for great music. Later on l'Opera night club is one of the best. More unusual après ski options include full moon mountain hikes to mountain restaurants for dinner.

We have no confirmed season dates for Les Deux Alpes.

Wishing you all the best in the Year of the Horse

YUI《HOLIDAYS IN THE SUN》12. Its all too much