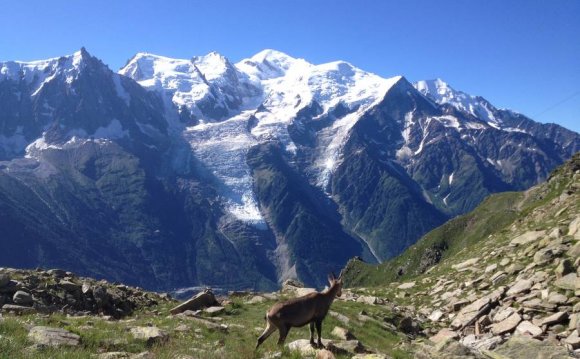 People normally choose one of the two most common routes to climb Mont Blanc from Chamonix. The route from the Aiguille du Midi, over Mont Blanc du Tacul and Mont Maudit is generally quieter, and highly dependent on conditions, but slightly more technical.

While not technically challenging, ascending Mont Blanc requires a high level of physical fitness and experience using crampons and an ice axe.

This is the classic and most popular route to climb Mont Blanc. Remember that you need to book in advance the Gouter Refuge. The hut is open from the beginning of June to the end of September. Bookings can ONLY be made online.

The first section is easy walking terrain on a well established path. Just after the Tête Rousse refuge, cross the infamous Grand Couloir where there is often rock fall from above.

The last 550m from here is scrambling rather than walking and not always easy, especially on the descent, because of the tiredness. Early on the second day, leave the Gouter hut and from here on there is glaciated terrain and crampons are required, with harnesses and ropes.

Most of the ascent is a long slow plod without any steep ground to encounter. Walk past the Vallot shelter, an emergency bivouac, and then climb along the Bosses ridge, the two lumps which form the distinctive skyline seen from the valley.

This is an exposed ridge which requires concentration and good crampon technique. This route takes about 4 hours and a half to reach the summit.

For people wanting a complete trekking guidebook, or to explore the finest routes up the Mont Blanc, also in hardcover or kindle edition, follow this link. Don't forget to take a map.

From here, descend the Aiguille du Midi arête to the glacier du Tacul, where there is approximately 1 hour walk on easy terrain to the Cosmique Refuge (3, 613m). Early on the day after, start climbing the Mont Blanc du Tacul.

This ascent can be difficult at times. Due to warm temperatures, in recent years more crevasses have opened up and, at times, this has required climbing on some steep exposed terrain.

After reaching the shoulder of Mont Blanc du Tacul descend and traverse the Col du Mont Maudit. From here, ascend a long snow slope to the final piece of technical ground, which can be very steep and requires good front pointing technique and use of an ice axe. Watch out for a bottleneck of mountaineers here!

Descend once again to Col de la Brenva, with stunning scenery towards Italy, then climb the last few hundred metres to the summit.

This is a slightly more demanding route than the Gouter route, both technically and physically. Tackle steeper ground and there are a couple of traverses that may be icy and difficult. Good crampon and ice axe technique are essential. It is, however, a more interesting route with beautiful scenery and is less crowded.

The Cosmique Refuge can also mean a better night's sleep, and can be less busy than the Gouter Refuge. This is a route which is long and sustained, less popular than the classic route, but which traverses the roof of Europe.

Climb up a famous route with a snowboard or a pair of skis, such as "The Three Mont Blanc's", "The Descent of the North Face" or "The Corridor Route".

The most frequented and most dangerous is the Classic Route via the Grands Mulets hut at 3, 051m.

The first ascent of the Mont Blanc on skis was via the classic route in 1904 by Ugo Mylius with Oberland guides: Tannler, Maurer and Zurfluh.

The first descent from the summit on skis was by a Swiss guide, Elias Julen in 1930. Marco Siffredi popped up to the Blanc for a quick surf after returning from his first descent of Mt. Everest on a snowboard in 2001.