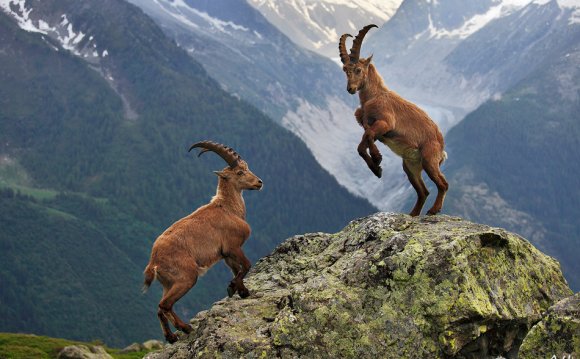 The people who study our oceans and skies worry about both of these phenomena.

But in wide swaths of 21st century America, the argument is still stuck on what to call the other side.

"Denier" can also describe those who reject the Holocaust, so some who refuse to believe that human behavior is warming the planet prefer the label "skeptic."

But scientists are de facto skeptics, and many resent that word being hijacked by people who sneer at their work and accuse them of fraud.

The other side counters with "fearmongering warmists."

After reading countless scientific studies on our warming world, I've always sought proof through the eyes of people who really know their ice.

And after reading countless refusals and rebuttals from libertarian bloggers, I've always wanted to visit their annual convention and better understand how they think.

So this episode of "The Wonder List" takes us from a Heartland Institute pow-wow in Las Vegas to the glaciers of the French Alps.

It is my first trip to the Alps, and Rocky Mountain snobbery disappears. The frozen rivers and needles of granite are achingly beautiful. And the people who climb them for a living sincerely wonder how long they will last.

600 years ago, when the glaciers were growing around Chamonix, local bishops were called to exorcize the demons in the ice to keep it from devouring forests and crops.

Now that they are going away, they turn to scientists, like renowned glaciologist, Atsumu Ohmura.

"95% of the world's glaciers that are monitored currently are retreating. And it is happening so fast, " he tells me. "It's 20 times faster than any natural temperature change before human beings became so active."

The professor's statistics confirm what they have seen in the glaciers above their town and in the ice beneath their boots.

"When I came here as a boy, the (Bossons) was several hundred meters below, " says Seb, was we dig our axes into the ice. "At the moment we can still enjoy it but in 40, 50 years what are going to say to our next generation? 'Oh, it was great! You should've been here.'"

Since the time when America was a newborn nation and the first men climbed Mont Blanc in woolens and top hats, the Bossons glacier we're climbing has retreated nearly a mile.

"Maybe one day there will be no glaciers and mountain guides will have to be biking guides, " says Fleur, a Chamonix native and one of the most accomplished female alpinists in the world. "We are revolted."

Of course, providing thrills and business in the "death-sport capital of the world" is far from the most important role for glaciers like the Bossons.

This frozen playground is also the water tower of Europe, and glacier run-off provides drinking water for hundreds of millions around the world. Which is why the rate of "la grande fonte" is so alarming.

For over 30 years, Yan has been forecasting for France's national weather service in Chamonix and is convinced other glaciers around the world are growing, despite the science of those like Ohmura. He believes the fear is manufactured by politicians and the wind industry.

"That's their job to say these things, " he shrugs.

I found plenty of similar conspiracy theories at the Heartland conference in Vegas, and had a few exchanges that frankly, you have to see to believe. But when I ask Ohmura about the allegations of hackery or corruption, he just sighs.

"Skeptics close their eyes while telling people to close their eyes from the reality. One must use simple thinking. Think. Open your eyes and think. It may sound a bit insulting, but there is no other suggestion I can use."