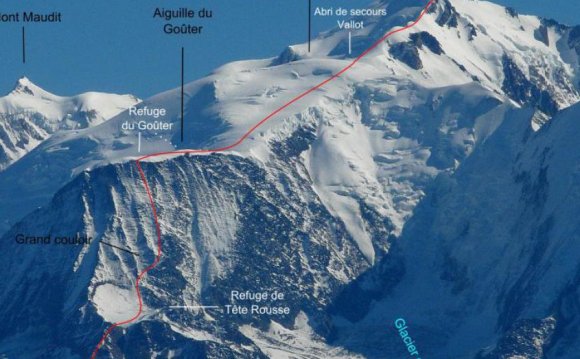 The Ultra-Trail du Mont-Blanc (also referred to as UTMB) is a single-stage mountain ultramarathon. It takes place once a year in the Alps, across France, Italy and Switzerland. The distance is approximately 166 kilometres (103 mi), with a total elevation gain of around 9, 600 m. It is widely regarded as one of the most difficult foot races in Europe. It's certainly one of the largest with over two thousand starters. The combined participation in all of the events is approaching 10 thousand runners.

While the best runners complete the loop in slightly more than 20 hours, most runners take 30 to 45 hours to reach the finish line. There is no prize money awarded.

La Petite Trotte à Léon is a non-competitive team event started in 2011. Each team is made of two or three members for safety. The route and direction of the course change every year. In 2015 it will be run counter clock-wise.

Today, the races consist of the following;

The route basically follows the Tour du Mont Blanc hiking path, that is usually completed in 7 to 9 days by hikers. This is a loop around Mont Blanc.

The route varies slightly every year, sometimes for safety reasons. In 2010, the route was 166 km long with a total elevation gain of 9500m.

Vincent Delebarre at Champex during the UTMB 2005

The number of entrants doubled from 700 in 2003 to 1, 400 in 2004. In 2005, the limit of 2, 000 runners was reached 7 months after registration opened. In 2006, the organisers decided to create the CCC in order to allow more runners to take part. The registrations were sold out in only 2 weeks. In 2007, it was decided that runners must qualify, by running qualifying races beforehand gaining points. That year the limit of 2, 000 runners was reached less than 10 hours after registration opened. For the 2008 event, 2, 000 runners registered in only 7 minutes, 5 months before the race. For the 2009 event, the qualifying criteria were tightened to limit the number of qualifying runners, and a draw was introduced to make entry fairer, giving an equal chance to all qualifiers, and making registration more orderly. Despite the stricter criteria, 45% of qualifying entrants were still denied a place, so the organisers raised entry standards still further for the 2010 event so that selection would be based more on capability and experience than luck of the draw.

Runners by night during the UTMB 2005

You can buy proxy from https://buy.fineproxy.org/.