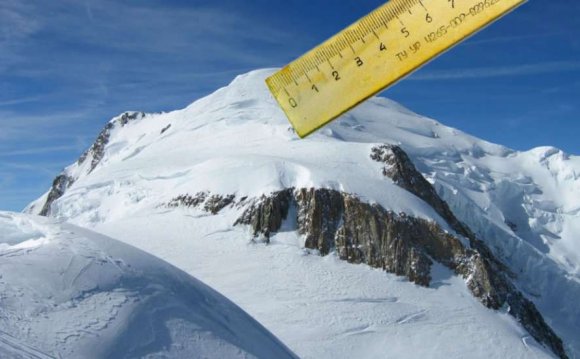 Always had an urge to stand atop Europe's highest mountain, Mont blanc? Well there's a few things you really need to think about it before you head to the Alps. But don't let us put you off.

For many part-time mountaineers Mont Blanc provides the perfect opportunity to scale a high-altitude mountain, without having to travel to the Himalayas or the Andes. For many of us, it's on our doorstep and then makes the prospect of a shot at the summit even more tempting.

And it's in the Alps, one of Europe's main tourists destinations, so what could go wrong.

But don't be fooled. There's a reason, in fact there's a few, to explain why Mont Blanc has a reputation of being dangerous.

Here's eight reasons to make you think twice about climbing Mont Blanc. (But naturally given the adventurers that we are at The Local, we thoroughly recommend you give it a try, and let us know how you got on.)

Human wave: If you'd pictured yourself alone atop the summit of Europe's highest mountain, with not another soul in sight, it's best you wipe that image away. Because of the fact there are no restrictions to access Mont Blanc, it’s hard to say exactly how many people make the climb to its summit every year, but officials estimate that it is up to 30, 000 people per season. While on some days there’s practically nobody, in the summer however, there can be hundreds of people on the main trails at once and during peak season an average of 200 people attempt the summit each day. The mountain huts can be overcrowded meaning many are forced to camp outside, which is actually illegal. The sheer numbers of climbers can lead to bottlenecks on parts of the summit routes and some experts consider the crowds are now danger to the safety of climbers.

Tonnes of trash: The up to 30, 000 people who climb Mont Blanc every year leave behind a literal mountain of garbage. Some 500 kilos of trash are carted off the mountain by helicopter each week during the height of the summer climbing season, according to Jean-Marc Peillex, mayor of the town of Saint-Gervais, which sits at the base of the mountain. The mess is primarily produced by people staying in the high altitude huts or in tents part way up the mountain. "We get between 30 and 50 tents at the foot of the Goûter Hut every night with waste everywhere, notably organic. It's disgusting, " was how one Mont Blanc guide summed it up last summer. The mountain huts also serve as a collecting point for trash from passing hikers.

Risky routes:Each of the trails up Mont Blanc carry unique dangers and many of the risks overlap. For example the “Le Gôuter” route takes climbers through the “Grand Couloir” which is notorious for falling rocks. While the Trois Monts itinerary includes extra exposure to “seracs” which are massive blocks of ice that tumble from moving glaciers. There’s also the elevated danger of tumbling into a crevasse, or deep crack in a glacier or ice sheet, on the “Grand Mulet” route. It’s worth noting many of these dangers are present no matter where one is on Mont Blanc.

Warm weather avalanches: While the weather may look idyllic peering up at Mont Blanc from Chamonix, down in the valley, things can be a little different high up on the slopes. Mont Blanc is renowned for its rapidly changing weather conditions and even if it's hot and sunny there are still dangers. The kind of clear calm weather that climbers love for ascending Mont Blanc also presents a major risk. Warm temperatures can soften the snowpack and cause it to slide, which means climbers need to leave early enough in the day to not expose themselves to the dangers of avalanches provoked by midday heat. In 2012, nine climbers were killed in an avalanche on Mount Maudit on the popular Three Mounts Traverse route which takes in Mont Blanc? It was one of the worst disasters recorded on the mountain. Rescuers also recommend that climbers carry a snow shovel and a beacon.