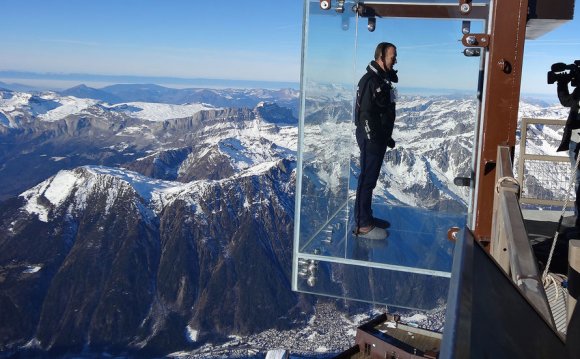 At the North Tower, there is a cafeteria and a snack bar open year round. In summer, the "3842" Restaurant is open. Situated at an altitude of 3842m, this is one of the highest restaurants in the world. Gourmet and regional food is on the menu.

The Aiguille du Midi has its own postage stamp and a letterbox. Postcards and stamps are available in the souvenir shop, open all year round.

At the cable car departure arrival/departure point, there is a History Area featuring the story of the station. Also, the machinery of the lift system is showcased through glass windows.

The Central Tower is circled by a a galleried walkway that connects the Rebuffat terrace with the terrace Mont-Blanc. From the terraces, one can view the Geant glacier and the Bossons glacier.

There is a panoramic viewing platform and a sheltered area with wide windows enabling visitors to gaze at the view even in bad weather. The brave ones can... Step into the Void!

The Aiguille du Midi gondola was first thought of by two Swiss engineers in 1905. Their plan was to link the hamlet of Les Pelerins with the summit of l'Aiguille du Midi. The project met technical problems and was abandoned. Four years later a French company, Funicular Railways, made a new attempt and the first section Les Pelerins - La Para was opened in 1924.

The second section La Para - Les Glaciers was completed three years later. It was then the highest cable car in the world - a title held for about two decades. With the outbreak of the WWII and the opening of the Planpraz to Brevent cable car, the popularity of the Aiguille du Midi diminished and it was closed in 1951. An Italian engineer, Count Dino Lora Totino, was called in to rebuild and extend the cable car.

Four years and a lot of hard work later, the new Aiguille du Midi cable car was finally completed. It was entirely renovated in 1991.