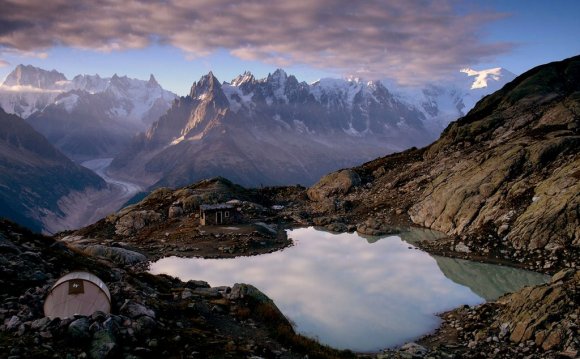 Sure enough, there the sky was blue and the conditions perfect. We were joined by Nico Poncet, a mountain guide and prof de ski who took us off-piste to some of the most sublime and deserted slopes I have ever skied, all covered in knee-deep powder. After I'd fallen over for about the 10th time, I lost my fear and began to relax into it.

When at last the long lunch materialised in the mountain restaurant Maison Vieille, I realised I had as much snow inside my jacket as out. I was soaked through. The owner Giacomo gallantly held up his fleece to screen me from the other diners while I stripped off to my bra at the table and put on one of his T-shirts. I'm told there's a photo of me up on the restaurant wall – hopefully it was taken once I'd got dressed.

With my clothes hung up to dry over the wood stove, I tucked into three different kinds of pizza followed by several different types of pasta, all home-made, with a fine red chosen from a fulsome wine list. As the snow began to fall thickly, a toasty afternoon in the restaurant stretched ahead of me.

Gavin did eventually get me out skiing again but the snow was so heavy that when we returned to the car park to drive back to Chamonix, we had to play hunt the car as they all looked the same covered in snow.

After an energetic half hour digging the car out, it was time to relax back at the Hôtel Morgane, an ultra-modern-meets-chalet-chic kind of place in the centre of Chamonix with luscious home-made marshmallows in large jars on the bar.

The next three days were a powder fest. The difference between on and off-piste disappeared under the blanket of snow and I finally worked out that if I wiggled my bum a bit, kept my knees bent until my thighs were burning, I could just about get the hang of the powder.

The avalanche risk stayed high, the snow continued to fall and Gavin's 22 years of experience in the mountains and valleys around Chamonix paid off. When the higher lifts in Chamonix were closed, we skied in neighbouring St Gervais, Megève and Argentero. If there was sunshine, he found it and we kept out of the worst of any cloud by skiing among the trees. His action-man credentials were confirmed when we came across a boarder who'd overshot the mountain side and was fruitlessly trying to climb his way back up a short cliff. Gavin unravelled one of his selection of ropes, lowered it down to the boarder, dug himself into the snow to get some traction and hauled the guy back up. If you're going to be skiing in an avalanche risk of four out of five, it's reassuring to know that your guide is equipped for all eventualities. We celebrated his rescue effort over rösti and fried eggs at the tiny but picture-perfect Alpage Du Balme restaurant.

A memorable dinner was had at the Hôtel Morgane Michelin-starred restaurant. My tip – if you're going to go for the degustation menu, lay off the tartiflette at lunchtime. It is a gastronomic feast and you'll want to do it justice.

A weekend in Chamonix

Win A Weekend In Chamonix