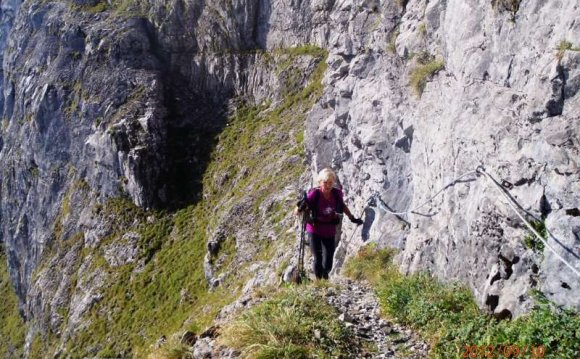 The course for the Mont-Blanc 80km race has taken a more remote and technical route. The first part of the course starts with a climb up to Bel Achat and then to Brevent (9.5km - 2461m) followed by a traverse at Flegere and the Col des Montets by passing through Tete aux Vents before descending to the Buet (25.9km - 1338m).

For the second part of the course things get serious with a climb to the col de la Terrasse (33.8km - 2645m) passing through la Loriaz: the climb is more technical than by the Tre les Eaux (2013 and 2014), but not as long. At this culmination point of the course, runners descend the combe de la Veudale to join the Emosson dam and traverse toward la Chapelle (38.7km 1963m). (Full aid-station).
From this point there is a sublime view of the Mont-Blanc range and the Tour basin before starting the descent to the villages of Gietroz and Chatelard to then go back up to the hamlet of Jeurs (45.5km - 1778m). The course then joins the Catogne hut and the tete de l'Arolette and the tete de Balme.

Runners will take the Ardoisieres trail leaving from the col des Posettes (51.1km - 1999m) to rejoin the village of Le Tour. They will take the northern balcony trail to climb toward the Planet village before going down via the Rambles trail, which avoids Argentiere, before going toward les Bois.

The third part of the course between les Bois and Chamonix will be a little easier before the last difficulty: the climb up to Montenvers (70.5km - 1900m) passing through one of Chamonix's most well-known tourist sites, the Mer de Glace. One final balcony trail at the foot of the Aiguilles des Grandes Charmoz, followed by the Blaitiere and the Fou lead runners to the Plan d'Aiguille hut (75.7km -2178m) overhanging the Arve Valley.
1150 vertical meters below the finish line awaits runners with open arms after their technical alpine trek of 82km.

The course runners dream of! The trails cross through an entire valley, over summits, south side trails, then the north side trails, allowing them to discover the panorama of the Mont-Blanc range and the magnificent grandeur of the Aiguilles Rouges.a unique spectacle!

Three courses are available depending on snow conditions and weather conditions :

For the 2015 Mont-Blanc Marathon, the organisation has decided to use the distances and vertical gain/lost estimated by the International Trail Running Association (ITRA, association of which it's a member), for the Mont-Blanc 80km and 42km. The organisation also insists on the fact that, according to the software used and the adjustments, the gpx files may have very different results (a vertical gain from 5600m to more than 7700m for the 80 km).

The International Trail Running Association explains, on its website, the method of certifying a route.Click here to have more information.

To get their bibs on the 80km runners will have to show their race bag with all their mandatory equipment to be checked. It will also allow the organisation to put a chronometric chip. No bib will be given to runners who don't have their equipment controlled.No bib will be given less than 30 minutes before the race start.